The main purpose of exposure-controlled photography (a style I like to call 'Lightplay') it to take a photograph that very few have taken and to show a common subject in a new light. It is well known that light is key to photography, and playing with it to build a more 'arty' style of image can produce some very interesting results. You will get a lot of failures and will play about with settings more than you'll spend getting the shot, but when you do you'll have something that you can truly call unique to you. 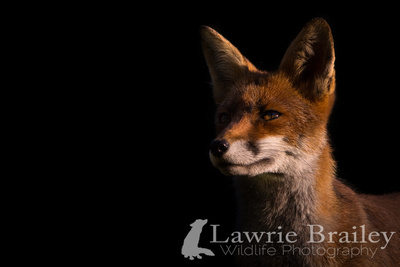 Before we get too far into the technical methodology behind shots like this this post relies on a basic understanding of the exposure triangle that underlines photography and all that follows will assume you know the terms aperture, ISO and shutterspeed. If not, I highly recommend researching exposure before taking a look back here! Happy to help with this if you want to drop me a message!

Lightplay photography relies on light contrast, and the ability to use harsh lighting to your advantage. Any of you who have used studio lighting rigs will understand the ability to manipulate light to create half-lights, rimlights and other such creative techniques, but with wildlife photography it's often impossible to even think about setting up two or three dedicated strobes to get anything, but luckily we are occasionally confronted with a natural version of the same set up. Allow me to explain with the aid of a diagram... This diagram sums up the position and lighting used to create the fox image shared above. As you can see, this shot was taken in the early evening, when the sun is low and where shadows and patches of brighter light are at their largest. I positioned myself with the light behind my right shoulder and composed the shot with the background left in shadow to create the maximum contrast between the main lighting and the rest of the shot. This created a fairly harsh Rembrandt-look that casts part of the subject progressively into darker and darker shadow until the 'black point' (point at which the details fall into pure black) is met. This is great for darker, more mysterious shots like the one above, but is also great for getting the classic '50/50' look you see on certain portraits - all depends on the lighting angle. An angle directly behind you will not create much effect, but an angle at 90 degrees to you will create the harshest contrast. It's all about experimentation. 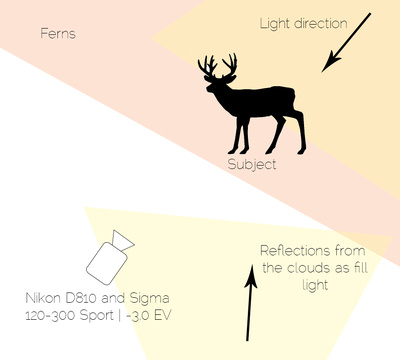 The other way to do this is composing the whole image with the light source BEHIND the main subject. This means only the very ends of the fur/feathers etc are lit properly, and creates the so-called 'rimlight' seen on the second photo of the deer shared above. Settings and considerations are exactly the same for each photo, but as mentioned before all depends on the lighting angle. Too high and you will end up with a lighter top half of your image and vice-verse. 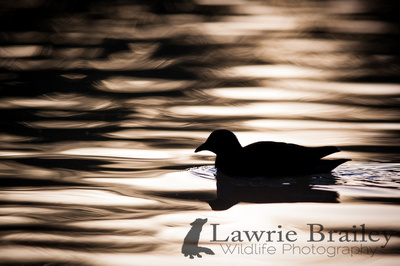 Twilight SwimThe outline of a coot in the evening light, taken using exposure compensation to only expose for the ray of sunlight.

There are two main ways to adjust the settings to achieve these type of shots and that depends on your preference for shooting mode. I personally tend to shoot in aperture priority mode (A or Av), and so I use the exposure compensation function on my cameras. Of course, if you shoot in manual for everything, then the same techniques can still be used just by altering your shutterspeed values to the same degree.

With harsh lighting we're essentially looking at two different exposures - One for the shadows and one for the highlights. When we usually take a photo in this light, the camera exposes for a rough middle ground with both highlights and shadows blown to some degree, and as we don't want that we have to compensate for the lighting. This is done by telling the camera to shoot for a number of stops (units of light) below what it thinks is normal, so in non-manual modes you tell the exposure compensation to expose under  by 3 stops or higher to cut out the darker areas (clip them to pure black) and expose for the lit areas. It's the same process in manual, except you alter the shutterspeed to remove those extra stops of light.

The exact value of exposure compensation varies between each shot. I typically start at -5.0 EV (exposure compensation) and work it back up if the result is too dark. The aim is to try and clip the blacks, but not too much that you lose the subject! 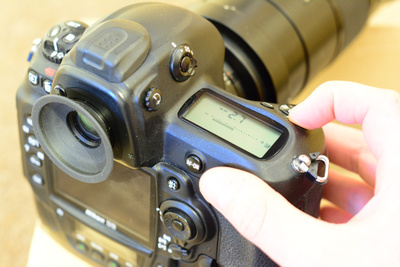 This is all about experimentation, and playing with the lighting angle and the exposure compensation can all yield different effects - Try it and see what works best for you!

Once you have the shot in camera, you need to make sure that the shot you saw and exposed for is actually the shot you'll see in print or on a screen. Quite often when shooting in RAW the clipped blacks you see on the camera screen won't be clipped in the final edit and so we have to put this back in in post. I personally use Adobe Lightroom for my edits, but the same techniques can be used in any platform. 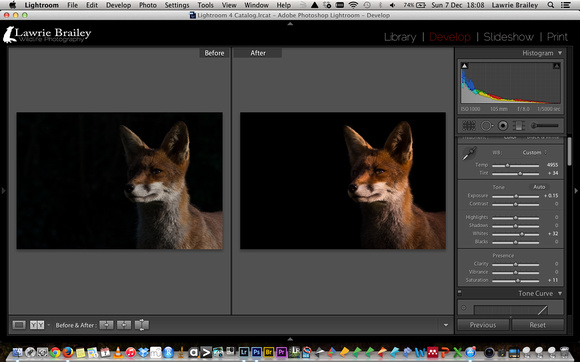 As you can see, the image that comes out of the camera is pretty much the same image that ends up posted online. I tend to start off in the same editing process as usual - namely colour correction and contrast, and occasionally might add in increased saturation and maybe a slight increase in brightness if needed, but the main area of work is to do with the white and black sliders in the basics tab. To adjust these, I find it's far easier to adjust the whites first to bring the contrast and brightness that you want, and then turn on clipping to adjust the blacks. Clipping is the way Lightroom and Photoshop tell you that something is either completely black or completely white, and on Lightroom is activated by pressing the 'J' key. 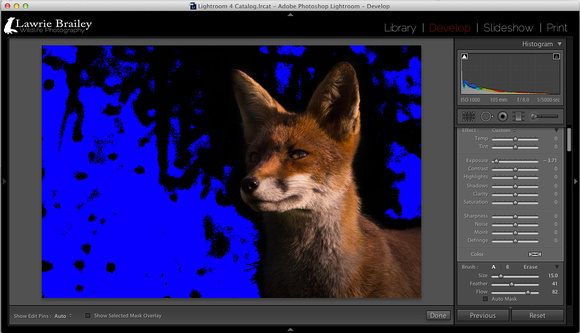 As you can see, although the original looks completely black there is still some colour detail left in the file, and that might start to appear depending on the monitor you use. To combat this we want to adjust the black levels to make sure all of this is fully clipped on any print or monitor, so take the black level slider and move it to the left to decrease the black point (the level at which blacks become pure black) 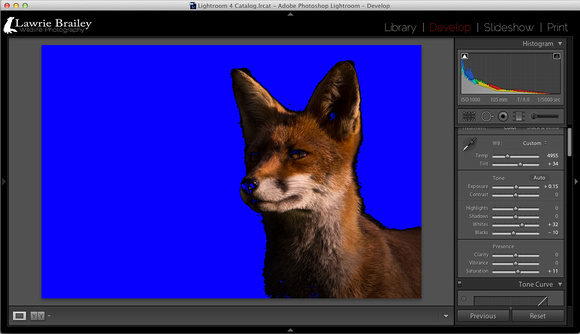 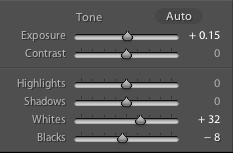 When this is done you can see that he entire background (and some of the fox, but this is ok in moderation) are clipped, meaning that however you view it, the background will still appear fully black, and that leads us on to our final image... 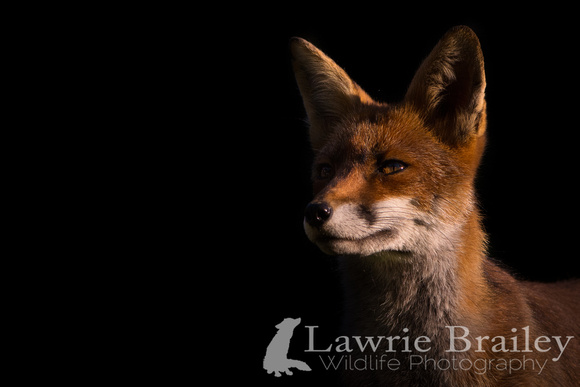 This technique is exactly the same for rimlit images... silhouettes... and any other style you may want to experiment with. As I said earlier, it's all about understanding the light and shooting for it. All you need to make something different are:

Hopefully that helped some of you out and answered a few questions. I hope you can go out and give it a try, and if you get something you love feel free to share it with me. Remember, as always, if you have any questions please feel free to drop me a message on the form above. Good luck!

Sitting PrettyA wild urban vixen nicknamed 'Scamp' sitting in a pool or evening light. This is done all in camera and more information on the technique can be found on my blog

Morning BreathLooking through my gallery you'll see that I enjoy this type of shot (probably too much!), and I really love how you can attempt to tell a story using the minimum amount of content possible whilst making fairly harsh lighting work. This is a red deer stag at the 2015 red deer rut in Richmond Park - London in the morning, taken using exposure compensation in aperture priority mode to only expose for the rimlight, dropping everything else out to black - I really like how it looks with the breath!

Puffin StudyThis is my attempt at 'lightplay' on my recent trip to Skomer Island in Pembrokeshire - Wales. Not as much as I would like but still gives something a little different? As always, all done completely in camera! Please see my blog for details.

Essence of FoxWhen doing this type of shot I always wonder how much of the animal is needed to make sure that the 'essence' of the animal is put across properly. I've always tried (maybe not succeeded!) to bring some of the animals personality to my images, and it's an interesting debate as to where this begins.

SidelightingLightplay with the cubs is hard - not only because the light is now so rare, but because the cubs have a tendency to move just before you press the shutter button. I must have taken at least 5 or 6 identical shots when this little one sat down in a shaft of evening light. I have to say I'm pleased with the outcome though!

CrystalWashington(non-registered)
informative.
Christina Saunderson(non-registered)
Many Thanks for taking the time to share this informative article. I am definitely going to try the techniques. Love your work.
John Clegg(non-registered)
Outstanding shot and a great effect that I will try to recreate with our dogs.
Steve Allen(non-registered)
Brilliant thanks Lawrie would this be deficit to do with a black dog. I will have a go Thanks again
Kind regards Steve.
Alannah Hawker(non-registered)
Very informative, love the diagrams too!
No comments posted.
Loading...
Subscribe
RSS
Recent Posts
5 Tips for Wildlife Photography Why I shoot in aperture priority Lightplay Photography - A Guide Welcome to the blog!
Keywords
lawrie photography wildlife camera brailey tips top five aperture manual mode
Archive
January February March April May June July August September October November December
© Lawrie Brailey 2020
Powered by ZENFOLIO User Agreement
Cancel
Continue