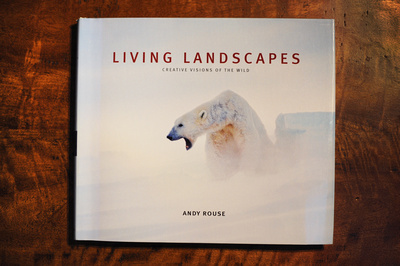 Andy Rouse is often seen as one of the most well-known names in wildlife photography, and, with over 20 major awards under his belt, I thought it would be only fitting to start with one of his older works.

Living Landscapes was first released in 2009, and is the forth major book published in Andy's career as a wildlife photographer. Following on from 'Animal Portraits' in 2006 and 'Concepts of Nature' in 2008, this book looks at his love of wider and more abstract images, moving beyond traditional animal portraiture to show his subjects in, and interacting with, their natural environment. In Andy's words, he aims to step away from the norms of what you would usually find in nature books to deliberately challenge the reader into imagining the story behind each moment.

A section from the 'HABITAT' chapter (Click to enlarge)

The first of these, 'HABITAT', is all about the wide angle lenses, and contains some beautiful images, ranging from a solitary polar bear walking through a vast expanse of blue ice to a very interesting abstract image of a mountain hare running along a hill crest (see the first image below). Each image is vastly different, and Andy has chosen to focus a lot on  some of the lesser-appreciated species that, in his words, are not usually award winning. This section tries to focus on covering every ecosystem, from an arctic tern flying in front of an iceberg to a red deer stag calling to his harem in the Scottish highlands. In my personal opinion, this section justifies this book alone, and many of the images have completely changed the way I feel about my own work. It shows the power that environment and scale can bring to an image, and shows just how little of a story we can see from a portrait alone.

The second section of this book is titled 'SNOW GEESE', and follows Andy's work with this species in Arctic Canada. This section is

A section from the 'SNOW GEESE' chapter (Click to enlarge)

accompanied by an extensive introduction to the section and the reasoning behind it, and mostly follows his journey into what he describes as his 'creative side' when working with moving subjects, and his trials to bring a sense of motion to his images. The majority of this section is taken up with 'creative blur' images using slower shutter speeds to produce a more abstract and dynamic image, and whilst this is not always to everyones taste it is nevertheless an interesting way to show movement in a still picture. The milky, abstract images could easily have fooled me into thinking they were paintings, and it brings a new sense of 'art' to what is usually a static subject, frozen in the air. Instead of capturing a single moment, these images seem to capture whole events and it is an interesting and very different (especially when this book was published) take on the traditional 'bird in flight' shot that I am guilty of myself!

A section from the 'PATTERNS' chapter (click to enlarge)

The third section, 'PATTERNS', focusses on exactly that, and takes a more abstract look at animals used to form natural patterns. The images here range from wider shots of a flock of starlings in a murmuration to close ups of the detail in an iguanas skin and the shadow of a leopard on a rock, and once again creates a completely different portfolio from the two previous sections. The shots here are designed to keep you looking, and it definitely works! There is one shot in particular - an arial shot of brown coloured juvenile king penguins amongst the white and grey adults - that really keeps me looking, and very much reminds me of a scene from Where's Wally!

The final section of the book is titled 'PLANET GALAPAGOS', and is a portfolio of images from arguable a location on every wildlife

A section from the 'PLANET GALAPAGOS' chapter (Click to enlarge)

photographers bucketlist. As with the rest of the book, this section features quite a few underwater images (which appeal to me!) as well as the more traditional (but by no means boring) subjects of the blue-footed booby and marine iguana. The vast majority of the techniques introduced in the other three sections are brought back, and it's a very interesting look at what the different styles can look like as a portfolio - some absolutely stunning images in it too!

Unlike a lot of photographers the very end of the book is purely taken over with technical information, from an introduction to the camera and lenses he used (incidentally both Canon and Nikon!) to a full set of image thumbnails accompanied by small snippets of information as to why he composed it a certain way or used a certain setting - a very good learning tool!

A section from the 'THUMBNAILS' section. (Click to enlarge)

The main reason I like this book is the shear diversity of images inside it. From the land to the air and underwater Andy explores a whole raft of techniques that are bound to get you wanting to try our a new approach. After all, in a rapidly stagnating world of wildlife images getting something that's just that little bit different can be the reason it stands out.